Irish Soldier of the Somme 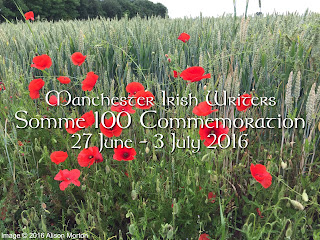 My childhood school friend was Claire Dignan (a derivative of Duignan), third generation Irish and living in Manchester.  This is the story of her father’s experience as a British soldier fighting in the First World War.  His account is personal to me because I knew him and loved him.

Growing up with an English accent, Tom attended a small Catholic school which he left at the age of thirteen.  When the call to arms came he naively joined the queues of young men seeking to defend his adopted country. Tom was just one of so many who learned to traverse the narrow line between life and death.

IRISH SOLDIER OF THE SOMME
One rainy day in April 1851 the Duignan family disembarked at Liverpool. They came from a place called Mohill, County Leitrim, Province of Connacht.  Seven of them, there were; some were deathly pale, some had rosy cheeks.  The older lads were strong like their Da but the weaker ones, boys and girls, were trailing, touching their Mammy’s skirt as it dragged heavily across the cobbled quay.
They settled first in Macclesfield.  Maybe the lads found work on the land. Then, on to Manchester where they put down roots and worked their way as best they could.  Times were hard and the years passed slowly, long day following long day.  They missed Mohill and the people they loved.  They missed the green fields and high wind-swept skies.
Generation grew from generation; deaths and births went hand in hand.  The natural passing of life and its subsequent renewal affected them just like everyone else.  They made friends; some of their own kind, others who were neighbours and church people like themselves.  Integration secured them another land to love – England.
In 1898, Tom was born.  He was a strong independent lad with a bright smile and clear eyes.  He loved his family but he craved adventure.  Tom hadn’t much interest in politics but he always knew right from wrong.   At seventeen and a half he signed up for war. His military induction included a visit back to Ireland, somewhere near Dublin, where he received basic training.  As a Catholic, he attended Mass on Sunday with his other Catholic comrades.  They had to leave Mass early to avoid the condemnation they received from some of the worshippers who didn’t look kindly on any man dressed in British uniform.  It hurt Tom to think that he was scorned and despised for doing his duty.

He fought at Ypres and then at the Somme.   Tom was shot by a German soldier while fighting to defend a railway station which had been captured by the British side.  It was bad, very bad!  The bullet just missed Tom’s femoral artery.  They carried him out to the hospital site dodging the bullets and shells.  He’d lost so much blood, they feared he would die but somehow he managed to cling on. A few weeks later they sent him home, home to England where his family had been praying for his safe return.  He became another statistic!  Another lie! 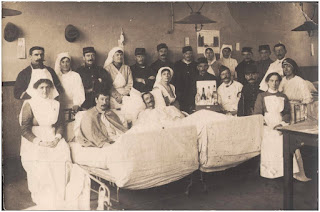 Tom recovered and lived on with the effects of his injuries.  He limped through the years but maintained his sense of humour and his sense of proportion.  He never complained; he had no regrets.  He married, and he and his wife raised four children.  He trained in accountancy and worked long hours in the city ensuring that his own children were free to make the choices they wanted as they grew up and left the family home.  Eventually, eight grandchildren were born and they were the joy of his life.
Tom was loved for his humour and kindness and for the twinkle in his eye.
When he was asked, ‘What would you do if you met the soldier who shot you?’
He answered, ‘He was probably just a lad like me!’
‘I’d kiss the bastard and thank him!   Thank him for releasing me from hell on earth.
By trying to take it, he gave me my life.  If your time’s up, it’s up!   Mine had some way to go.’
‘It wasn’t the same for all the lads who fought so bravely for King and country.’
‘I’ve no regrets, though!  I did what I had to do.’
There’s more than a little bit of Ireland in England today.  For all the wrongs that have been done, England has provided succour to those who left to escape the hunger, the lack of work, the deprivation of land and inheritance.  For the Duignan family the Irish heart remains.  The English influences are deep-rooted and Tom’s children and grandchildren have prospered in their adopted country.  Yet, there’s still a strong and enduring pull to Ireland and the little town of Mohill deep in the Irish countryside.